A Bit of Fluff about Desert Men Under the Dying Sun 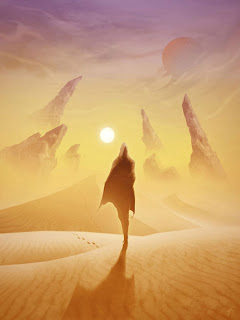 A race of Quasi-Men specially adapted to life in the deserts. They are extremely thin, to radiate heat, and nearly hairless with coppery skin that does not burn in the sun. They have nictating membranes to protect their eyes, with almost vestigial outer ears and nostrils. True Men say that Desert Men are a product of the forgotten magics of the Senex. Desert Men generally do not care what True Men think.

Desert Men inhabit the sandy wastes in small, nomadic tribes, herding fierce tholat and other desert-dwellings species. Unlike many nomadic peoples, Desert Men do not ride animals. Despite their light frames, Desert Men are amazingly fleet of foot and they are superbly adapted to run for long distances under the brutal sun.

They supplement themselves by trading with settlements or raiding merchant caravans. Because they are always afoot, a raiding party of Desert Men is a strange sight in which a group runs in from the desert, firing their bone bows, leaps aboard any vehicles and runs off with the goods. Most Desert Men claim that they belong to the Trading Tribes and that the Bandit Tribes are bad men. Most city-dwellers maintain that there is no distinctions between Trading and Raiding Tribes and that Desert Men only trade with settlements after they have first raided the goods of merchant caravans. Desert Men habitually shrug at such comments.

They may take any class.

Desert Men have the following special abilities, for which they receive a -5% experience penalty:
- +2 to CON Checks and -1 STR Checks in addition to any class-based bonuses.
- May perform shot on the run with the bow.
- Move twice as quickly as True Men when unencumbered.. They have a base move of 120’ per round. This is reduced to 60’ in armour up to Chain and to a normal 30’ in Plate.


The picture Mirage is by Jason Engle and used without permission.

Email ThisBlogThis!Share to TwitterShare to FacebookShare to Pinterest
Labels: Fluff/Inspiration, Spellcraft + Swordplay, Under the Dying Sun