My kids--god love 'em--think that I am a good artist. I have no idea why, except that I can produce modestly amusing pigs and robots:

Anything else is really quite beyond me. Even my daughter--my biggest fan-- upon seeing my attempt at rendering her favourite super-hero Raven (from the Teen Titans)...

Actual Drawing by me

Unfortunately, I don't think any of that is really how I want Under the Dying Sun to look. When I picture the game, I picture this: 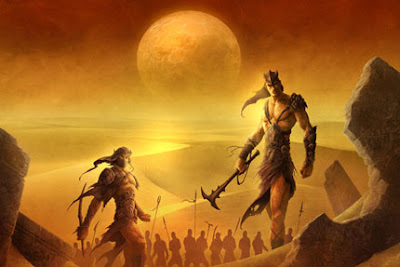 or, of course, this: 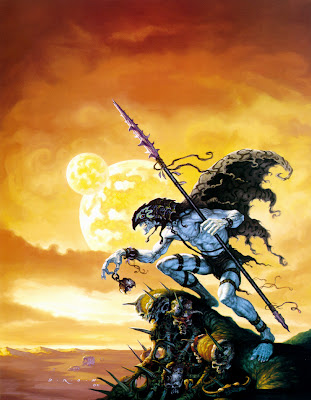 So, I'm just putting this out: I need a decent artist. Or ten. Whatever. If anyone draws art that looks more like the second two pictures than the first two would like to contribute to my little project, I'd be grateful. I'd be more than grateful: I'd be really grateful.

I'd also be happy to talk to anyone who wants to sell me some art. Preferably you will ask for semi-amusing drawings of piggies and robots in recompense.

Animals & Monsters Under the Dying Sun

Animal life under the Dying Sun is extremely different from that of our experience. The notable animal types are reptiles, avians, and insects, many of which grow to unusual size when compared to our animals. The various species of Men are the only mammals; they are aberrations in the biosphere and might plausibly be considered “monsters”.

Monsters are, in general, weird and strange. A few creatures might be known, though perhaps only be reputation, but most should present characters with a fear of the unknown. “What is that thing?!” should be a common exclamation upon sighting a monster.

To keep the mystery of monsters, the Referee may wish to use the following Monster Generator tables. The first step is to pick a pre-defined monster, such as those appearing in the Spellcraft & Swordplay core rules, Book 3. This provides the “base” creature. Then roll on the following tables: 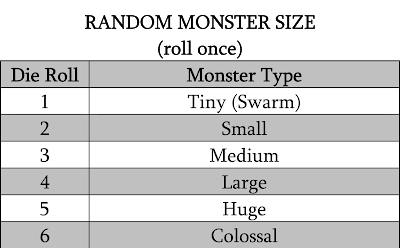 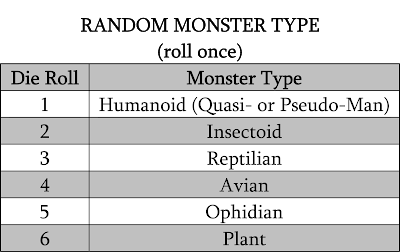 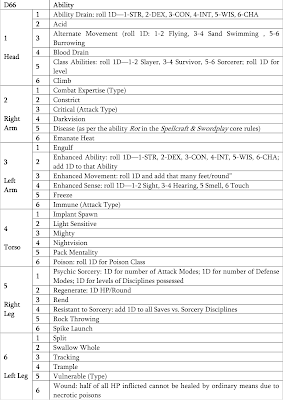 Infra-Men are hulking Quasi-Men of bestial appearance and mentality with a deep crimson-coloured skin and black hair. Of the same general type as Helots, Infra-Men are larger, generally stronger, and much stupider. They may have been a labour-class for the Old Men who became feral after the Collapse. In any case, they now wander the lands under the Dying Sun in small bands, warring with each other by and large, but are always happy to kill True Men, who the regard as racial enemies.

Some few Infra-Men possess Class Abilities. These inevitably become Chiefs and Shamans of their bands and can be fearsome foes indeed.

Darzai: Wolves of the Plains

Darzai are man-sized avians that fill the same ecological niche as wolves do in our world—pack-oriented predators and scavengers. Their bodies are covered in thick reddish-brown feathers (giving them an equivalent to padded armour). Large, hooked beaks protrude from their heads. They are flightless and the wings have evolved back into limbs, although these front legs are smaller and shorter than the rear, giving Darzai a weird stance. Nevertheless, they run very quickly despite this seeming ungainliness and they can attack effectively with their front claws.

Unlike wolves, Darzai have a sense of smell only comparable to humans. However, their vision is exceedingly keen and they hunt by sight rather than scent.

Sand Ghul: Nightmare of the Wizard


Sand Ghuls are a horrid variety of Quasi-Man, although whether a degenerate line of mutants or some sort of artificial beings is unknown. They appear as naked humans, but with deathly-gray skin and four digits on each hand and foot.
Although only semi-intelligent, Sand Ghuls are masterful hunters with amazing capabilities for concealment. Any attempt to detect the presence of concealed Sand Ghuls suffers a -3 penalty. They travel the wastes in small packs of 1-6.

Sand Ghuls crave the brains of psychics. They prefer to stalk small parties traversing the desert, staying hidden until the dead of night. Using their Detect Psions abilities, they find psychic prey. They are clever enough, however, to know that the most powerful of psychic may be more trouble than they are worth and usually choose middling-level psychics. They then utter their weird, haunting hunting cry, which sounds like a ghostly horn drifting from the wilderness. At the same time, they use their Domination to summon their prey out of camp, where they will be swiftly dispatched and the Ghuls feast upon their brain.

Email ThisBlogThis!Share to TwitterShare to FacebookShare to Pinterest
Labels: Monsters, Spellcraft + Swordplay, Under the Dying Sun

The Tholat: A Creature of the Deserts


Tholat are large, herbivorous lizards, growing up to 15’ in length with a tail half again as long. They have dull emerald skin and a ridged dorsal fin that filters moisture out of the air. Tholat are well-adapted to life in the sandy deserts—besides their remarkable dorsal ridge, they can eat virtually anything, and can survive extend periods of starvation. This makes them an excellent choice as the preferred herds of the Desert Men. Those Men keep largish herds and are able to use the entirety of the tholat for their needs—Desert Men make a beautiful, green leather from tholat flesh, they eat the meat, they burn tholat excrement, and they even make a fermented drink from tholat blood, which they extract in small quantities from the living beasts.
Tholat are, however, incredibly ill-tempered beasts. They think nothing of biting a person who annoys them and are careless in the extreme of walking right over or sitting down upon other living creatures. Unlike most pack herbivores, tholat are not easily affrighted and will as likely fight predators as run away (perhaps because they do not move particularly quickly) They also smell horrendous as they emit a near-constant stream of flatulence. Desert Men tend to take the behaviour (and stench) of their ornery beasts in stride, but most other Men cannot stand them, even if they do rather enjoy tholat steaks.

Email ThisBlogThis!Share to TwitterShare to FacebookShare to Pinterest
Labels: Monsters, Spellcraft + Swordplay, Under the Dying Sun

Map of the Hajal Region

I posted my first take at a small-scale regional map awhile ago, with 1 hex equal to 10 miles. Although very, very far from complete, it gave me the basic frame so that I could work on a larger-scale, one where 1 hex equal 2 miles. This map is centered on the City-State of Hajal, which is going to be the Lankhmar/Sanctuary/Tyr/whathaveyou of the Kahira setting.

Alert-eyed imaginary readers will note that I have already substantially changed the geography from the earlier effort--Hajal is on the other side of the great valley now.

Anyway, here's what we gots so far:

Not from lack of industry, I assure you. I've been gearing up for my play-test and it's amazing how just preparing to play makes the bone-headed stuff jump out at you. Examples?

Steel weapons are supposed to be amazingly rare in this setting as they are essentially +1 weapons. I made them 5 times as expensive as regular weapons. Well, if you roll 3d6x10 for starting funds, you actually can afford steel without too much luck. That's kind of bone-headed on my part. But, it got me thinking that in a game that emphasizes scarcity, 3d6x10 is actually too much for starting funds.

I thought it would be neat to have some randomness in the number of Disciplines possessed by untrained sorcerers. That sounded good until I my very first play-tester rolled up three Disciplines. That's how many an actual Sorcerer has. So, this other character is, in essence, a Sorcerer and the other class as well. That doesn't work for me. I'm going to change at so that untrained sorcerers only get one Discipline to start with.

More examples? Stop pestering me, already. I think I've made my point; no need to embarrass me. The point is that I have been cleaning things up a lot, which is great stuff, but makes deadly dull blog reading. So things might stay a bit quiet for a while.

Under the Dying Sun--PbP Play-Test

I'm noticing a distinct lack of recruitment for my play-test PbP over at rpg.net. If any imaginary readers of the blog want to play, come on over to this thread and jump in.