Quite Distracted By: Consumption (and Super-Heroes)

I have been pretty much knocked out the picture for a while now.  I don't actually have consumption, but I did give up my dental practice and move West to become a professional gambler and sometime gun-fighter.
Okay: not really.  But I have had this bronchial thing for weeks now and was too stubborn to go to the doctor because I kept saying that I was feeling better.  But I gave up and went in and am now zonked out on prescription-strength cough syrup and anti-biotics.  In between hacking fits, I've been thinking a lot about super-hero gaming which I intend to post about once I'm mentally competent.
So do try to cary on a bit longer without me.  Oh, and let's all avoid being nasty to each other and having valuable members of our community shut down or get slaged off and whatever.  Even though I've been sick, I'm saddened to see the Old Guy Blog gone and I've seen some unpleasant things said here and there about other bloggers and their players.  Seriously, do we need to resort to that?

Email ThisBlogThis!Share to TwitterShare to FacebookShare to Pinterest
Labels: Quite Distracted By

Having posted my draft map for the Kahira Region the other day, it dawned on me that some imaginary person might enjoy the map I made for the home base in my Onderland Campaign.  It's not perfect (what is?), but I'm pretty please with it in general:

Email ThisBlogThis!Share to TwitterShare to FacebookShare to Pinterest
Labels: Onderland

Quite Distracted By: Engines & Empires (Again!)

Email ThisBlogThis!Share to TwitterShare to FacebookShare to Pinterest
Labels: Engines and Empires, Quite Distracted By

Places Under the Dying Sun: The Black Ziggurat (and How to Get There)

[in response to the wonderful idea brought forward by Blair over at Planet Algol and with all respect to Clark Ashton Smith]
If you wander the the Grand Souk of Hajal, you may find the stall of a blind Desert Man, so ancient that his coppery skin has tarnished to dull brown.  The Blind Man will, for a certain sum, sell you a map made by application of human blood upon human skin, which he calls the Map of Jayendra, although it is hard to tell if that worthy made the map or if the map is made of him.  Either way, this document purportedly shows a path through the Red Desert, far to the south of Hajal and the Plains of Kahira.  Treading this path, one may avoid the worst scourges of that locale, says the Blind Man, until, after seven noons of walking, one comes upon an eternally-howling sandstorm.  In the heart of that immortal storm, lies the Black Ziggurat.
On the other hand, if you bypassed the tawdry trappings of the Blind Man, you might turn into the Avenue of Idol-Makers, where virtually any divinity can be made to order.  The Avenue is a noisy place, filled with the hellish heat of innumerable fires as pieces of scrap metal are melted down for use in the fashioning of gods.  Thus, the constant scurry of scavengers and looters, toting a broken knife blade or an antique door handle stolen from some decrepit part of the city, add to the confusion that naturally surrounds any place dedicated to theogenesis.  If one's timing is good, one may then bump into the down-at-heels scholar, Kanti Karna, once a high official in the court of the Tyrant, but now reduced to the selling of scrap to birth deities after falling from favour.  With proper persuasion and sufficient inhumation of the fumes of the ajat, Kanti Karna may allow one to see his personal copy of the Scrolls of Hamayoun (or the selections which he has, at any rate).  In the thirteenth scroll, one could then find a very learned discourse upon what that savant generally called "The Atramentous Pyramid of Zoghah Chanbil", but which he once refers to as "The Black Ziggurat".  In this discourse, Hamayoun states with exactitude that the Black Ziggurat lies upon the shores of the Lost Sea (although, of course, the Sea wasn't lost in Hamayoun's time), exactly opposite the mighty city of Thanjivar, some distance to the north of Hajal (which, of course, did not exist at that time).
Should one ignore the theological mysteries of the Avenue of Idol-Makers and choose, instead, to leave the Grand Souk by way of the Eupotamic Bridge, one might find one's purse lifted by the hirsute form of a club-footed, one-legged Wild Man from the Tharian Hills to the Northwest.  This larcenous individual, an escaped slave by all accounts, is surprisingly dextrous for all his natural faults.  Should one be able to restrain the Quasi-Man, some knowledge of his homeland may be extracted by threats of bodily harm coupled with bibinous blandishments.  He may then reveal the common gossip among the hill-men, that beneath the stinking waters of Devil Lake, a cyclopean ruin stands, the Black Ziggurat.
Foregoing further hypotheses, it seems that there is broad agreement across the lands under the Dying Sun as to the existence of a mighty structure, a sombre pyramid of unknown and seemingly unknwable provenance.  Yet the impression of the dedicated scholar and/or looter, is that the Black Ziggurat is both everywhere and nowhere.  Wherever one travels, it is a myth, a rumour, a dark legend and just beyond the next hill.  But none can verify any claim to have ever found it.  It is called the Tomb of God and the Gate of Death and the Obsidian Crown of the World; to it are attribute divers power and portents; and it is both ancient and newly-made.  Some have gone so far as to suggest that the Black Ziggurat is an Ideal, onmipresent through the cosmos, even upon other worlds.  Of course, the Arch-Necromancer and Tyrant of Hajal officially discourages talk of other worlds--worlds perhaps not dying beneath an angry, terminal star--with measures unsuited to scholarly discourse.

Email ThisBlogThis!Share to TwitterShare to FacebookShare to Pinterest
Labels: Fluff/Inspiration, Locations, Under the Dying Sun

This Kind of Map or That?

So, here's the in-progress version of the map of the Hajal region (the sample setting for Dying Sun) which I posted a while back:

This one I did with Illustrator.  I was, however, just reminded of the excellent Hexographer program, which has added some good stuff since last I played with it.  A few minutes of fooling around gave me this equivalent map: 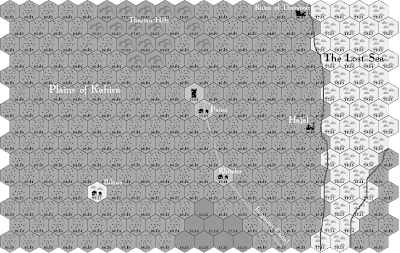 I think I prefer mine, but I'm a bit unsure.  So, dedicated masses, what do you think?

Email ThisBlogThis!Share to TwitterShare to FacebookShare to Pinterest
Labels: Locations, Under the Dying Sun

So that's what I'm doing in my off-time right now.  I'll conclude with the spell lists as I have them right now: