I recently posted on an idea for one-roll combat resolution, where the combat roll (aka "to hit" roll) would determine how much damage is dealt.  In other words, eliminate the damage roll without eliminating random damage.  I like that idea and still intend to try it out sometime.  But I was struck by an inverse idea posted by JB at B/X Blackrazor: eliminate the combat roll and only roll damage.  JB's idea goes further than mine in exploring the inherent possibilities of Ye Auld Game's abstract combat system, where hit point damage means a lot more than actual wounding.  In JB's idea, taking 1 hit point of damage is likely to represent getting just a bit more tired; 2 hit points might mean losing your breath, and 3 hit points  getting fouled up with your scabbard at the wrong moment.  Or something; it's abstract.  Really, nothing means anything in particular until you lose that last hit point.
Another thing that JB's idea does is to put a stop-watch on combat.  You and your opponent are going to be losing at least 1 hit point per round.  Time (and life) are running out.  That really changes the psychological impact of combat: the tank can't walk in and hope that all those kobolds' daggers are going to bounce off of him.  And speaking of psychology, I should recall why JB had the idea in the first place: you never whiff in this system.
But as dedicated, hypothetical readers know, I am constitutionally unable to take a system and not hack it just a bit.  So as I was sitting under the old tree at lunch, eating my sandwich and reading a comic-book in the balmy Hawaiian breeze, I thought of two things I might change were I to give this a try (and I might)  These won't make any sense unless you read the original post.  Do that and come back; I'll wait.
OK then:
I. Simplify Armour Class
You might recall that I went through a protracted period of coming up with a Weapon vs. Armour Class matrix that I could love.  There were a lot of missteps along the way, but I did get it at the last.  And the way I was able to make it work out right, was to simplify Armour Class.  I reduced all the various types and numbers to four:
I really, really like this scheme and I think it would work well with the idea under discussion too with one slight change: Unarmoured becomes AC 0 and the rest all shift down so that Plate ends up as AC 3.
Base damage remains 1d4 for small weapons, 1d6 for medium weapons, and 1d8 for large weapons.  But, in this hack, the Armour Class number tells you how many die-shifts down to make.  So a guy with a longsword (d6) attacks a guy in leather armour (AC 1): he gets 1 die-shift down and rolls a d4 instead.
For those who like their combat matrices, the PC version would then look something like this: 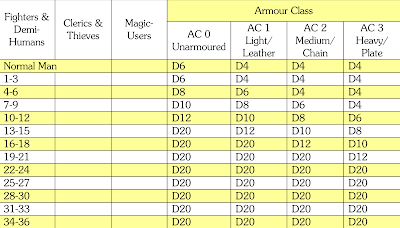 (Yes, I noticed that I forgot the Cleric and MU parts of the chart.  Sue me.)
Of course, you could easily eliminate the matrix, since the AC tells you how many shifts to make.  All you need to do is to give characters a new stat like "Base Damage Bonus" or something.  Fighters get +1 every 3 levels and so on.  Easy-peasy.
But looking at that matrix, something stands out to me: there are an awful lot of of D20's on there.  That gets me to wondering if you might want to make things slightly more involved and say that, while you cannot shift below D4 or above D20, shifts that would otherwise do so instead give a +/- to the die roll.
So, Aggro the Axe, a 5th level Fighter (+1) with a battle-axe (D6) attacks a guy in Plate armour (AC 3).  The D6 shifts up to D8 because of of Aggro's level, but then shifts down 3 places due to armour of the opponent:  D8-> D6-> D4-> D4-1.  Aggro rolls a pitiful D4 and then loses 1 point from the total.
Conversely, Gutboy Barrelhouse, a 15th level Dwarf (+5) wielding a great axe (+1), attacks Abner the Wizard (AC 0).  Due to level and weapon, he gets 6 shifts up and no shifts down from armour: D6-> D8-> D10-> D12-> D20-> D20+1-> D20+2.  Gutboy rolls a minimum of 3 and could do 22 points to poor Abner.
If we took this option, the matrix would look like this: 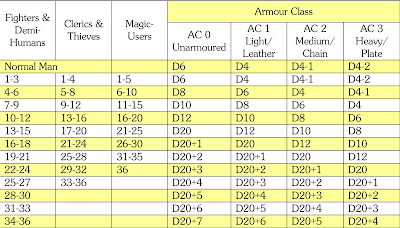 II. Simplify the Dice
My loyal and imaginary readers will also recall that I'm not a huge fan of the full suite of polyhedrals.  I love my six-sider and don't really need much more than that.  So, a further thought was to try and render this system into one using nothing but D6.  This turns out to be easier than I expected at first, although it requires some obscure notations.
And so on.  It's simple, but it's hard to represent on a matrix.  Nevertheless, it might look like this: 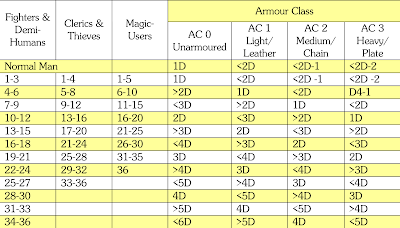 Now that's a proper matrix: utterly arcane unless you know the secret of the notation.  Of course, we do know, don't we?  An entry of "
One thing to notice is where the dice correspond to the original chart: what woudl have been 1D12 on the original is 2D6 on this, which is a nice correspondence.  The full comparison is:
That might be too many dice rolling at the high end though.  This isn't WEG D6 or (shudder) HERO.  One might say that after 3D, the shifts just begin to accumulate as pluses, so that a 35th level Fighter attacking an unarmoured guy rolls 3D6+4.  Really, that's  matter of taste.
Anyway, that was both exhausting and intriguing.  I'd like to try it sometime.