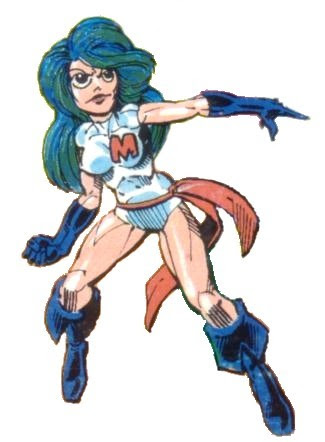 Name: Marion Scheckter
Motivation: Hurt men
Fight: 11
Qualities:
Excellent [+2] Furious Fighter
Remarkable [+2] The Feminist Avenger
Good [+1] Taunting
Weakness:
Irrational hatred of tough men
Retains full-size mass when shrunken
Powers:
Monstrous [+6] Compression (Meta-Power)
--Excellent [+2] Shrinking
--Excellent [+2] Super-Strength
--Excellent [+2] Invulnerability
--Excellent [+2] Super-Leaping
Origin: Marion Scheckter had a hard life. A small, frail girl, she grew up with an abusive father who made her feel even smaller. At seventeen she married an abusive husband and went from one hell to another. The more she was abused, the smaller she felt. One day, her husband noticed that she was, in fact, smaller. As time went on, she grew tinier and tinier, which prompted more  and more abuse. Then she snapped. The next time her husband hit her, he broke his hand on her remarkably dense flesh. Laughing, Marion beat him nearly to death and then vanished, only to reappear as “Ms. Anthrope”, the Feminist Avenger.
Tactics: Ms. Anthrope isn't a subtle opponent.  She likes to come flying into the scene like a human rocket with her Super-Leaping and smash into the toughest-looking male she can find.  Thereafter she tends to slug it out, taunting her foe all the while.  Her small-size makes it hard to hit her (MOD adds to her defense roll in most cases) and fighting her has been likened to fighting a swarm of angry, super-strong bees that just keep buzzing about.  Ms. Anthrope may try to convince female heroes to liberate themselves from "the Andrarchy" and join her.
Her Weaknesses reflect her inability to resist fighting men and the drawbacks that being super-dense can have: she has been defeated more than once by making her stand on soemthing structurally weak and watching her collapse it on top of herself.
Commentary: This villain is based on the character Marionette from the module, "There's a Crisis at Crusader Citadel" by Jack Herman and Jeff Dee.  My version goes rather far afield from the original concept, which was a girl with self-transformation powers, whose inferiority complex resulting in her shrinking herself.  In order to stop this, she studies yoga, which halted but did not reverse the process and, simultaneously, gave her super-hypnotic powers.  This is definitely not cookie-cutter stuff, but it just doesn't entirely work for me.  Also, mind-controlling villains are not that much fun in play in my experience: the player just has to sit out the scene.
What I find interesting in Marionette is the core idea of a psychologically-wounded girl who's power makes that trauma physically manifest: she feels small and inconsequential and becomes small.  The original write-up doesn't tell us why she feels this way, so I supplied an explanation.  Having done that, it seemed like she ought to turn her anger back onto the men who hurt her.  That gave me a real motivation, which the original lacked.  Since this is for a 1970's game, the character of the Angry Feminist fit right in.
But if she wasn't going to control minds, what was a 2-foot tall woman supposed to do?  The metaphor then appealed to me of having the minority-size figure display unexpected strength.
As for the name, well, Jeff Dee's illo has a prominently displayed "M" so I had to go with that.  Given her motivation, "The Misanthrope" popped into mind; but given my 1970's setting, I just couldn't resist making that into "Ms. Anthrope".  If that's too silly, the other version is good too.
Ms. Anthrope has some of the same potential interest as STRIKER: she has a legitimate beef, one with which many folks will sympathize.  There's also scope for some fun rivalry between her and the group's strong-man, who may or may not have issues with punching a woman (even a super-dense one) and who may or may not have issues with being beaten by a woman.

Illustration by Jeff Dee. Use here does not constitute an attempt to infringe upon his rights.

Email ThisBlogThis!Share to TwitterShare to FacebookShare to Pinterest
Labels: Supers, Truth and Justice, Villains and Vigilantes