Here's a little bit of fun super old-school fun I cooked up: a way to do randomly-determined powers in Truth & Justice.  Here's how it might work:

1.  Every hero starts with 6 ranks in powers to distribute (as RAW).
2.  Roll 3d6 and consult the Powers Chart below to get a Power.
3.  Assign as many or as few ranks as you wish to that Power.
4.  Repeat Steps 2-3 until you run out of ranks.
5.  Now figure out what the hell the hero can actually do and come up with a name and uniform!
(Optional: allow the player to discard one power at any time and reassign those ranks.  This allows a little bit of customization as a Power that was rolled early and given few Ranks might seem better by the end.) 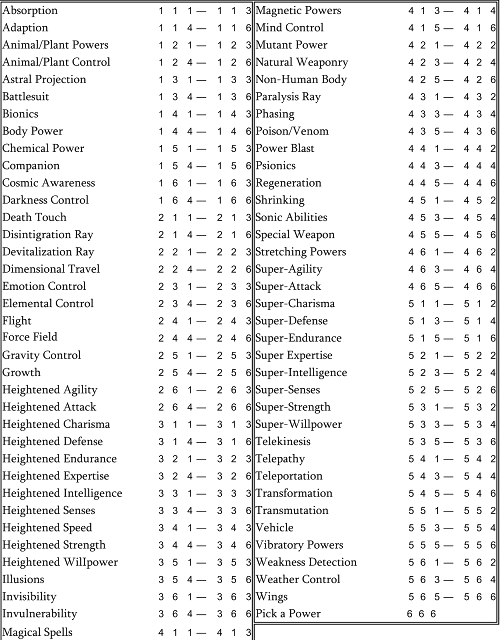 EDIT: I just noticed that I got the dice screwed up between the first column and the second.  As Doctor Doom says, "Nuts!"


The Powers noted as Heightened X are Qualities rather than Powers. Any ranks assigned to them convert into two ranks of that Quality (this is essentially the same as buying ranks of Intensive Training).

Right now, each power is a s likely to come as any other power. To emulate genre better, you'd need to play with the odds, so that Flight (for example) is much more common and Death Touch is much, much less common (I can think of two characters with this power ever).

A special No-Prize to the first person who can tell me from whence I swiped this table.

Posted by Matthew Slepin at 7:30 PM

Email ThisBlogThis!Share to TwitterShare to FacebookShare to Pinterest
Labels: Supers, Truth and Justice