An Internal Debate: What Kind of Thark? 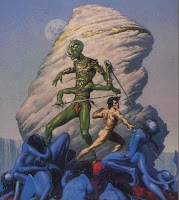 So a Sword & Planet setting needs a non-human race that are generally antagonistic to civilization, but might form friendships with True Men on occasion. The archetype, of course, being Burrough's Green Men (1912).
What's important to note is that Green Martians are basically monsters in design: savage and loveless, gigantic, four-armed, green-skinned, tusked, and antennaed.

An ardent fan by the name of Michael Moorcock, masquerading under the pseudonym of "Edward Powys Bradbury", write a trio of Mars novels (1965) that presented the Argzoon, also gigantic, but essentially humans with blue-skin.

At the same time, fellow disciple Lin Carter took his first a several stabs at this archetype. In his Lemuria Cycle (1965), as he loved to term these things, he has the Rhmoahal, very much the same as the Argzoon: giant, blue-skinned humans. In his Callisto Cycle (1972), which is more clearly Sword & Planet, he created the Yathoon: the much more monstrous insect men who possess amazing leaping abilities and a sort of logical barbarism. This culminates in his Green Star Cycle (also 1972) with the Kraan, gigantic ants which display the same imperturbable logic.

I'll conclude this little tour with TSR's Dark Sun setting (1991), which has a lot of Sword & Planet trappings and which elevated the mantis men, the Thri-Kreen (a painfully cacophonous name), from another monster to the Archetype being discussed.

All of the above is just to say that I need me some Tharks for Under the Dying Sun. But what sort? Here's the leading candidates in my mind:


1. Reptile Men
Reptile Men have long history in D&D--folks have been grooving to the Lizard Men since Day 1 as far as I can tell. Reptile Men work awfully well in a desert setting, which tends to elevate reptiles and insects into the ecological niches which mammals occupy in other settings.


2. Insect Men
That reasoning also applies to Insect Men (by which I really mean Bug Men, I guess, since I'd include arachnids and whatnot in this category). They have the additional advantage of seeming more alien than reptiles. Lots of folks find insects icky; lots of others find them wicked cool. They get built-in armoured carapaces and lots of other options: extra arms, claws, mandibles, wings, poison, spinners...and on and on.

One drawback is that it's easy to carried away and give Insect Men too damn many advantages. Another is that Insect Man is pretty identified with Dark Sun (and Arduin before that). But still there are some untouched options: Scorpion Men and Spider Men both jump to mind.

3. Blob Men
This one is a little wilder. But Blob Men--such as the Dralasites from Star Frontiers--are keen. 'Nuff said. The only drawback is that they trend to be a bit slow-moving to form a credible howling mob. Oh, and it also seems like they might just dry up in a desert.

Posted by Matthew Slepin at 5:50 PM