Rough Draft of the Wounds Table

I've been knocked on my posterior with the flu and am crawling back out of the wreckage. Work has suffered a bit and I'm not as far along as I wanted to be. But, I thought that I would post the Wounds Table even in the rough form I have. Conscientious imaginary readers will recall that this comes from an idea that sprang from another idea and which I am incorporating into my version of Dark Sun.

I'm rather too proud of finally getting to use the D66 roll, which I have long considered damn clever and which I have unsuccessfully been trying to do something with for ages. It comes from Traveller, which only uses d6's, and can be used to generate flat probabilities from 1-66: one die represents the tens place and the other represents the ones. (and you probably know all that already). I like it as it lets me pack a lot more information into a single roll without having to go to "the funny dice". 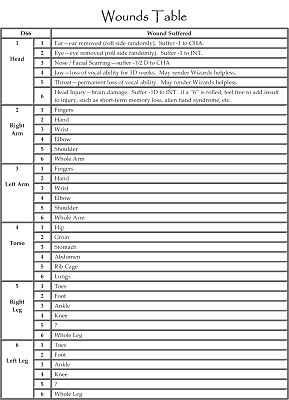 Posted by Matthew Slepin at 6:52 PM