Like a lot of gamers my age, I never, ever used Weapon vs. AC modifiers. I learned to game with the Holmes '78 "Blue Book" which didn't include such thoughts. Although I swiftly "moved on" to Advanced Dungeons & Dragons, I was still pretty much playing with the Homes rules for a long time. I do vaguely recall looking at page 38 of the Player's Handbook and a table rather stentoriously called "WEAPON TYPES, GENERAL DATA, AND “TO HIT” ADJUSTMENTS". I squinted at it for a while and then backed away slowly.

So, it was a bit of a surprise to me how excited I was to see Melee Attack Matrix By Weapon chart in Spellcraft & Swordplay. Why the change of heart? I'm not entirely sure. I'll lay most of the blame at the foot of AD&D. Variable weapon damage in AD&D was one of those things that just baffled me. Why did weapons do differing damage to large creatures is still a "how do you get the goose out of the bottle" thing for me. But worse, once you took out the weapon-type adjustments, the long sword became such an optimal weapon that only suckers (or Clerics) took anything else. I wanted colourful scimitar-men and spear-men and axe-men and so on, but why be foolish and do something so impractical?

What S&S so cleverly did was re-introduce non-variable weapon damage (flat 1d6), but replace the tactical considerations with weapon-type adjustments in a much simplified (from AD&D) form. And since differing weapons have differing strengths or weaknesses against the various armours, there is no longer any clearly optimal weapon. I have a character in my Onderland campaign who uses a morning star--it's colourful and helps define him. And he isn't a schmuck for having taken it.

All that said, every time I look at the Matrix, something bothers me. Where do the numbers come from? Why is one weapon better than another in certain circumstances? Why should I just accept what the man behind the curtain tells me? In many ways, the single most elegant system I have ever seen for this is King Arthur Pendragon and I have considered trying to adapt it, but KAP doesn't feature as many weapons and it has elements better suited to representing romantic chivalry than the down-and-dirty life of a D&D character (for example, swords never break on a fumble in KAP, unlike other weapons. That's atmospheric, but doesn't really make any sense).

Therefore, I decided on this particularly slow work day to do something that I have been toying with for ages--going through Chainmail and the Player's Handbook and compare the weapon-type adjustments to each other and to S&S as written. I can now report to my busy, postulated readership that this is an extremely dull enterprise, but one not without certain interest in the end. Therefore, you may thank me for sparing you the effort and giving you only the benefits.

Before I get to the analysis, a few notes on the difficulties encountered. All three games have greatly varying lists of weapons. Chainmail, for example, only lists 14 weapons (conveniently numbered 1-12. Yes: 12. I don't know either), including only the generic "Sword" and leaving out clubs, fists, hammers, and staves. Yet, Gary's ardent love of pole-arms is evident even at this foetal stage of Ye Auld Game; the 14 weapon list includes both "pole-arm" and "halberd" and makes them quite distinct. On the other hand, the Player's Handbook lists some 44 weapons (almost 4 times as many, although it must be said that fully 17 of those 44 are various pole-arms). S&S has almost the same number of weapons as Chainmail, (15 as opposed to 14) but they aren't the same weapons. Similarly, each game contains slightly different armour-types and armour classes.

Therefore, I have adopted a few rules for my analysis. First, I list only the armour type by name and not armour classes. Second, I leave out any armour type that is simply an armour paired with a shield, because I make shield impart a -1 penalty to attacks. This has the effect of obscuring some of the advantages of the flail, which gets bonuses against armour+shield pairings. Third, I had to make some subjective calls on comparing weapons when the types didn't quite add up. For example, S&S lumps clubs and maces into the same category; AD&D has two different types of maces, along with clubs, and Chainmail doesn't have clubs at all. Fourth, after some debate I decided to leave the AD&D modifiers as pure modifiers rather than as a target number in the fashion of Chainmail and S&S. Since those two games use 2d6 for the combat role while AD&D uses 1d20, converting a target number would involve a lot of fudging. So bear in mind that the pluses and minus in the PH are more granular than those in the other two games.

Finally, a note on representations. A "--" means the game doesn't address that weapon. An "*" means that the weapon cannot hit the armour type (this only appears in S&S). 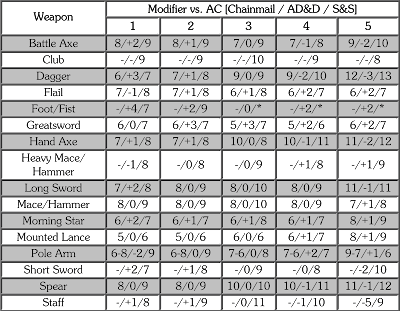 Okay then. Great. So what does all that mean?

Well, I'll be looking at this more of the next few days, but we can see some preliminary results easily enough. Notice that some modifiers are quite consistent across games. If we grant that a score of "8" in Chainmail is usually equivalent to no modifier in AD&D, we see that the mace is the most consistent weapon across the board: it is basically no modifier except for a +1 against plate in the two older games although S&S varies things a bit). We see that the Long Sword is no longer the optimal single-handed weapon: almost average as the mace, but a little better against unarmoured folks and much worse against plate. Finally, the spear sucks in every game, but sucks the most in S&S.

On the other hand, look at how the humble hand axe varies from game to game. It's miserable against armour in Chainmail, is a little better in S&S, but is quite decent in AD&D. And pole-arms--always trouble from those guys--are hard to even figure. I had to put two different numbers for Chainmail and I still haven't quite analysed this thing.

More importantly for me, this brings home that there is so general something at work behind the numbers. As Jason Vey (authour of S&S) said to me, he did his matrix more as art than science, meaning that he just kind of felt his way through. Having run this comparison, I'm more impressed by that method. All in all, I'm more contented with Jason's matrix than not. But now I feel that I have a better basis for fiddling around with it. I like battle axes and want to treat them more as the older games did. It's easy for me to see how I might juggle the numbers now (I might just swipe the Chainmail number whole-sale).

Why is that important for me? Easy--now I can get on to making my Dark Sun combat matrix. Is any of this of use to you? I have no earthly idea. But I'll accept your imaginary thanks all the same, kind sirs.

Posted by Matthew Slepin at 9:11 PM