Whether born killers or honed like a knife throughout their life, Slayers are just plain good at killing things. They may be gladiators, outlaws, soldiers, psychopaths, or bandits of the more bloodthirsty variety. Even a 1st level Slayer gives common folk cause for concern; at higher levels, the mark of death is visible upon them to all who look.


Slayer Abilities
Exceptional Strength – Slayers know how to use brute strength to it's best advantage when trying to slaughter something. Whereas anyone gets a bonus on melee damage from high Strength, only Slayers get the bonus "to hit" as well. 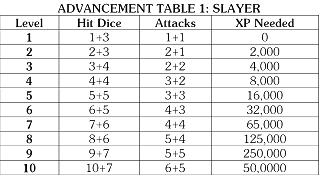 [Note: I have jiggered around with Hit Dice and attacks from the S&S rules. Why? Um...I have a thing about symmetry.] 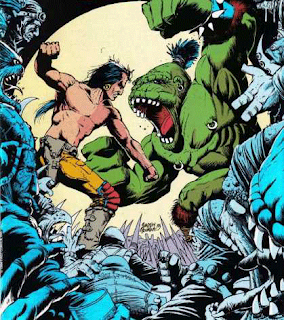 
Gahn Jont was born and raised in "the Abyss", the worst slum in the City-State of Tyr. Sold as a slave when a child, his killer instinct was quickly recognized and he was made into a child gladiator (a popular fad at the time). An intensely dour individual, Jont earned his nickname due to his habit of assuming a "death's head" grin when preparing to kill. "Grinning Gahn" became the second most successful gladiator in history and won his freedom upon his thirty-third kill.

After some years spent as a rootless adventurer, a middle-aged Jont mysteriously came into possession of a cheap tavern in the Abyss called "the Death's Head". He can often be found there, quietly drinking and scowling. He still hires himself out as a mercenary trouble-shooter upon occasion and allows others to use his place likewise as long as they keep trouble outside.

In the game: Gahn Jont might serve as a mentor for any poor character who can establish some connection to him (despite his cynicism, Jont has a soft spot for people who's life he has saved as well as old friends). He might as easily become an antagonist for anyone who gets on his bad-side as he nevers forgets a betrayal. The Death's Head can serve as a location for acquiring jobs or contacts. Just don't get into any fights there.