Most of us learned the idea of the dungeon map from D&D (which, since D&D arguably created the dungeon-map, makes sense).  It is akin to a very simplified blue-print, depicting a top-down, two-dimensional view of the structure on gridded lines.  It looks like this:

The Fantasy Trip, that proto-GURPS which evolved itself from a melee-game, suggested something a bit different within it's equivalent to the Dungeon Master's Guide, Into the Labyrinth: 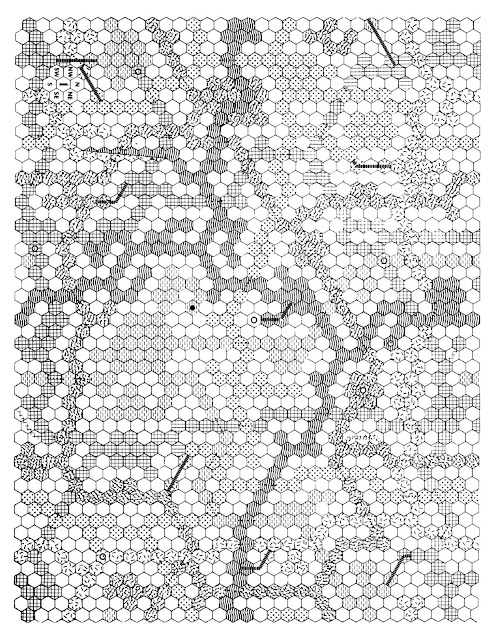 This is, in many ways, a fascinating alternative style of mapping.  I want to discuss three.
First, it is most definitely not a blue-print.  It is an abstract map that in no way resembles the territory.  It is more akin to a series of directions laid out on visual form: turn right here, choose left or right next, and so.  That abstraction brings both advantages and disadvantages when compared to what we can call "the classical dungeon map".
The significant disadvantage is readily apparent when you look at it: it is ugly.  And by that, I don't just mean aesthetically unappealing (although it is that), it is also much harder to read than the classical map.  It comes across as both cramped and cluttered.  In addition, by not attempting to replicate the look of the actual dungeon, it does not convey any aesthetic information to the Referee.
Compare it with my humble little map done int he classical style above: my map shows the Referee that the tunnels are winding, irregular, and organic, formed by centuries of water winding through the limestone to create a karst geography.  Look at the tunnel running between Areas 2 and 22: the map depicts the wildly varying diameter of this tunnel.  Area 22  itslef is supposed to represent a man-made section that has fallen to ruin.  None of that appears on the TFT Map.
But the abstraction into direction is helpful too.  Imagine a player trying to map that same tunnel.  There are no map keys there; barring wandering monsters, there is nothing significant in the tunnel.  Do you, as the Referee, want the player to struggle with somehow conveying all of that information on rock-form and diameter and whatnot?  Or can the player just draw a line from the tunnel to the south to the tunnel to the north and call it good?  After all, mapping adventurers are not cartographers or geologists; they just want to know how to get from Point A to Point B.
Let's turn to the second item.  You can't tell unless I give you part of the map key:

This TFT map depicts depth in a two-dimensional format.  Part of the reason then that the map appears so cluttered is that it holds six different dungeon-levels on it; the other part of the reason is that the levels ought to be depicted by varying colours but are done in black-and-white.  This three-dimensionality is something for which the classical-style map is notoriously unsuited.  The D&D books had to resort to cut-aways to give indication of depth and the relationship of the various levels to each other on the horizontal plane.  Despite that, most classical map of multiple levels end up stacking neatly on top of each other, so that you get what amounts to an upside-down high-rise.  I don't want to get into the mid-80's experiments with three-dimensional maps, such as in the original Ravenloft; suffice it to say that they looked cool, but they were a bit hard to use in play and, more to the point, are beyond the ability of most players to create.
Third, and much less meaningfully,  I dare gamers of a certain vintage not to look at the above, imagine that it is in colour, and not think of TSR's board-game,  Dungeon, whose board looked like this: 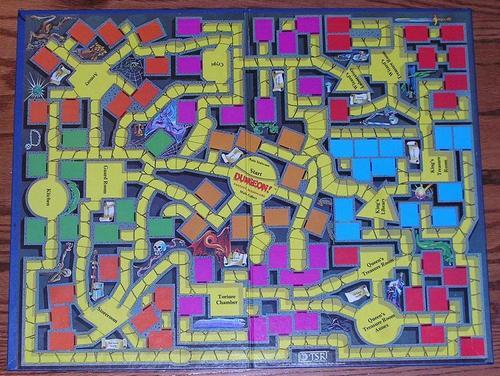 I have many fun memories of playing Dungeon (despite it's flaws), so that exercises a certain appeal to me.
I have never used the TFT-style of mapping, but I must say that I am finding it more and more attractive.  It cuts to the heart of the matter in a way that the classical-style doesn't.  In making my own maps, I find that the biggest speed bumps are those little representational details that don't matter one white to the players.  Indeed, I am embarrassed to say how many times I redrew that blue map up at the top of the post because "I just needed to fix a little something".  In someone who is already prone to the procrastination of perfectionism, this is a real problem.
I think I could avoid some of the confused nature of the sample-map by being able to use actual colours.  I have already thought to "correct" the proposed colour-scheme by using the actual spectrum (Red, Orange, Yellow, etc.); the key given substitutes Brown for Yellow and I know that I would never remember that in play.  Additionally, it would be easier now to depict tunnels crossing over/under each other than it was when that map was drawn by, I think, Ben Ostrander 30 years ago.
I do have some trouble seeing how to represent man-made dungeons in this method, given the inability to draw lines straight left or right, but maybe that is me confusing the map and territory again.

Posted by Matthew Slepin at 8:14 PM