The London Underground Comes to the Rescue

In thinking about some of the problems presented by the Fantasy trip-style of mapping, it suddenly dawned on me that a lot of the same problems had been faced by the London Underground and solved by the clever Harry Beck in his iconic map for the Tube.  Earlier maps had been a bit confusing. 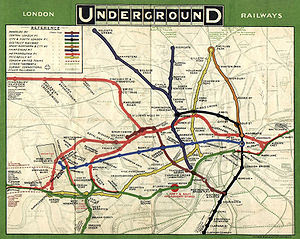 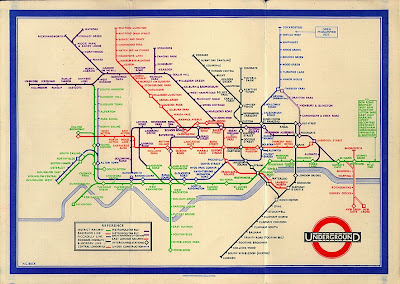 The genius of this map is that it abandoned geographic realism in favour of abstraction concerned solely with the relation of the various lines and station to each other.  Added to this, by denoting the various lines with different colours, it becomes possible to show where they overlap with other lines and still keep it all clear.
This method of mapping only improved over the years.  The contemporary map is just a model of clarity.  To really see that, you have to zoom into the central loop. 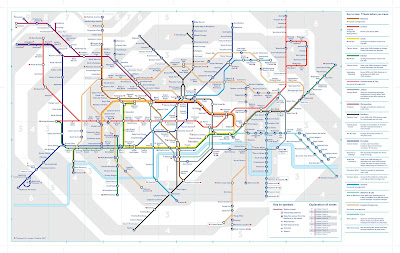 So, this map shows me a great way to do the TFT-style map.  Instead of colouring the entire hex, draw fine, coloured lines.  Three big advantages to this.
First, it lets you draw straight right and left , as well as up and down, becuase you can draw along the edge of the hex as well as through the middle.
Second, you can easily show different levels running overlapping by having differently coloured lines running parallel in the same hex.
Third, the whole thing becomes so much less cluttered.  Look at the tube-map: it's so damn clean.
I think I'm going to play around with this for a little while and see how it goes.