Mutants Under the Dying Sun

Following up from this post about playable races.  I'm convinced, I'm convinced: the species presented in earlier drafts are too indebted to Dark Sun.  I'm definitely keeping Desert Men and Scorpion Men.  I'm dropping Helots and Wild Men.  But I also realized that I was being silly (read: stupid) in mentioning and then dismissing mutants.  Mutants should be a go.  I think that I shied away from them because I didn't want to add in complex rules for mutations and whatnot.  I still don't, but I no longer believe that I need to.
I do not want crazy, Gamma World mutants (note: I like crazy Gamma World, but not for this game).  In my mind, mutants under the Dying Sun are the kind of guys you would see in the Den and Taarna segments of Heavy Metal or wandering the streets of Cynosure in Grimjack (the Tim Truman Grimjack). 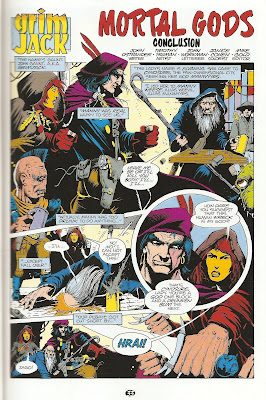 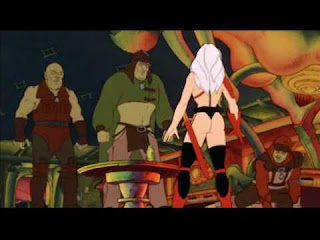 So, what follows is a first draft.  Let me know what you think.
Mutants
Uncounted millennia of radiation, atmospheric pollution, and weird science-sorceries have had a notable impact upon the make-up of those beneath the Dying Sun. This is no less true for Men than any other beast. Mutants abound beneath the Dying Sun. They sport odd features; although most are minor, such as unusual coloration of skin, hair, or eyes, some mutants are truly monstrous in appearance.
True Men tend to view Mutants with contempt and distaste. Those settlements controlled by True Men will make Mutants second-class citizens or slaves. Despite the True Man’s term of “Quasi- Man”, mutants are not actually aspirate species and those which are not born sterile are able to breed with True Men. In more mixed populations, mutants may pass without comment and the products of mixed unions not uncommon.
At character creation, after assigning Ability Scores, roll once on the Mutation Table

Abilities may be raised as high 13 (super-human) due to bonuses and as low as 2 (sub-human) due to penalties.  But note that bonuses must be equivalent to penalties; if a cap is reached then both bonus and penalty are reduced to the fullest extent that they can reach.  For example, a Mutant with a STR 10 and CHA 4 rolls 2 on the Table and then rolls a modifier of "3".  It is possible to raise the STR to 13 (10+3), but it isn't possible to lower CHA to 1 (4-3).  The lowest CHA possible is 3, which is a modifier of 2.  Therefore, STR is only raised to 12 (10+2) in this case.

Posted by Matthew Slepin at 9:54 PM

Email ThisBlogThis!Share to TwitterShare to FacebookShare to Pinterest
Labels: Game Design, Nonhumans, Under the Dying Sun