Again with the Weapons versus AC Chart?

Yes, again. My last attempt was here. And, as I said then, it was good enough to test-drive. But having done so, I'm now convinced it needs more work. The basic idea is sound. The Weapon Class thing is working great and the Weapon Size thing is nice too. But the actual numbers? Not so much. So, Attempt No. 4 follows.

I'm trying one very new presentation here. Rather than have the chart show the number needed to hit, I'm working on the idea that you always need to roll an "11" to hit, just like every other roll in Spellcraft & Swordplay. Instead of giving the target number then, this chart gives you a modifier to your roll. It's actually all the same damn thing, but looks different. It's more AD&D Weapon Modifier, I guess, although my goal was to make it simpler to judge the value of the various Weapon Classes at a glance and unify the mechanic more. 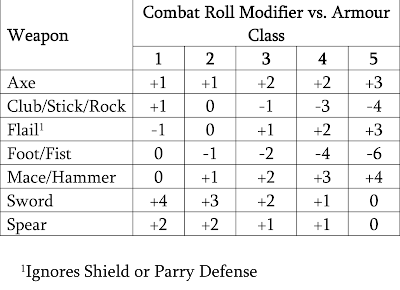 So, you say, what's going on here? My earlier attempts took the Chart as presented in S&S, bundled things into Weapon Classes, and tweaked a bit here and there. This time, I started with a clean slate and just played with it. My first principle was that Swords are pretty much the best things in the world for attacking unarmoured guys and get less effective as the armour gets heavier.

I then made the bludgeoning family into the inverse--getting better and better as the armour increases. Is that realistic? I don't know. My goal isn't realism, but rather the twin goals of plausibility and variety. I want weapon choice to be a tactical consideration akin to Rocks-Paper-Scissors--no weapon is the best at all times.

I get a little wacky with Flails. I decided that they function like Maces, but are harder to wield successfully, giving them a -1 when compared to the other bludgeons. But, they ignore Parry and Shields, meaning that they are slightly superior when fighting an opponent with a Shield.

Foot and Fist was relatively simple--it's pretty much always a bad choice. This isn't a gong fu game, after all.

I had some trouble with Clubs. After all, aren't they bludgeons like Hammers and Maces? Well, not really when you think of them as basically non-weapons pressed into service. So I made up a new Weapon Class lumping all those things like that together and made them suck, but not quite as much as Fists. The thing to keep in mind is that by "Club", I don't mean something like an Aztec war club. Anything really big or spiky or metallic goes into the Mace/Hammer class.

That left Axes and Spears. Now those were hard. You can see that I ended up just trying to split the difference from all the other classes, making the Axe a lesser Mace and a Spear a lesser Sword. Neither is as good as the model, but neither gets as sucky at the extremes either. I'm not at all wedded to these numbers and it wouldn't surprise me if a continue to play with them. Still, this is my favourite stab at this thing yet.

Posted by Matthew Slepin at 1:25 PM