Just something I thought of looking at today. 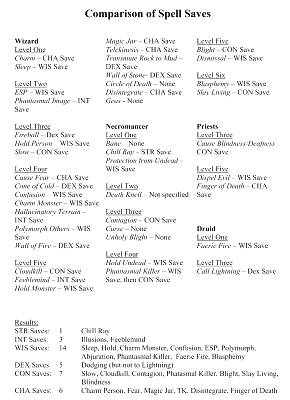 Rather interesting results. I know that Jason basically used the save types from Castles & Crusades, but I'd like to make a little sense out of this.

Well, WIS is obviously the most useful attribute in this area, applying twice of much as the next most useful attribute (CON). And it largely makes sense to me when thinking of WIS as encompassing willpower. I think Faerie Fire doesn't get a save; it's essentially a targeted Light spell, so I could see giving it a DEX Save, but it's effect's are so minor that I think I wouldn't bother. Phantasmal Killer is an illusion and that should go in the INT column. That's the easy ones. The two problem areas are Polymorph and the various Enchantments. Polymorph I can sort of see if I squint a bit: using willpower to keep one's form. But I think CHA might be more obvious here if you understand CHA as encompassing self-image.

The issue of Enchantments is harder because saves of this type are spread out between WIS and CHA. Frankly, either makes sense to me, but I think we need a but more uniformity here. Charm (Person), for example, uses a CHA Save, but Charm Monster uses WIS. Fear uses CHA, but Sleep uses WIS, even though both would seem to be the same sort of magical influence.

Indeed, CHA is the weird one here, rightly reflecting it's troubled history of identity (that is: what the hell does CHA measure anyway?). It shows up relatively frequently (one of the top 3), but the spells it helps against are rather a mixed bag: some enchantments (as discussed above), but also Disintegration, Finger of Death, and (most confusingly) Telekinesis.

I think we can ditch TK right off the bat: that ought to be a STR Save (which is nice because STR only has one Save as it is and that's kind of a weird one). I'm unsure on Disintegrate: I think that should probably be a CON Save if it works materially, but stay a CHA Save if it's work be destroying an object's essential self. I'll leave it as CHA for now.

The only way I can approach CHA Saves is, as I said above, to approach CHA is measuring the strength of one's self-image. In that case, we can (try anyway) to make distinctions between spells that work against one's conscious mind, which could use WIS as a save, and those that affect the unconscious self , which could use CHA. Let's see how that goes:

Well, those were easy. Here are the harder ones:
That leaves a couple of spells without saves that probably ought to have them:
As a first stab then, our new list would look like this:


I like that. Admittedly, the CHA Save tend toward obscurer spells (3 out of 10 are optional Necromancy spells), but then the WIS Saves tend toward monster-only Abjurations ( 6 out of 11). But still, I think these very few changes give a bit more cohesiveness to the thing.

Posted by Matthew Slepin at 3:55 PM