I don't recall where I first heard this idea; probably Grognardia, but when a guy posts as prolifically as James, it is all but impossible to search around the archive and find soemthing.  Anyway, the idea was to have an abandoned city as a dungeon.  What that means, specifically, is that movement would restricted in the same way that it is in a subterranean dungeon; the characters can't just climb over buildings.  Not sure I am explaining it all that well, but it's late on a Friday afternoon.

The point is that I was just idly looking at the old TSR Lankhmar: City of Adventure from 1985 (I think).  It had this booklet with some ridiculous AD&D write-ups for the daring duo, some maps of the various districts of the City of Black Togas, and then a bunch of city geomorphs to be placed in the city as needed.  And it occurs to me that this would work really well for the urban dungeon.  The district maps are probably a bit too much, but the geomorphs are at a much larger scale and are already on gridlines. 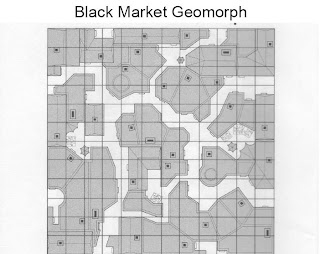 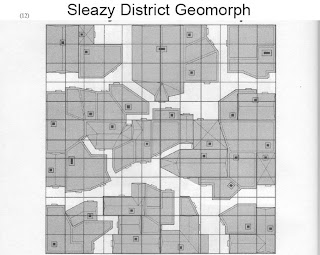 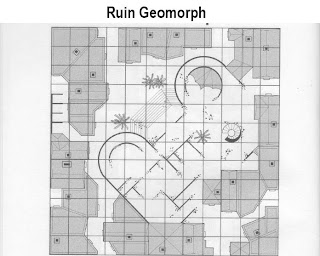 One of the appeals of the urban dungeon to me, is that there is an underlying rationale for all these rooms.  I'm afraid I have a lot of trouble with fun-house dungeons or even the regular old dungeons with a bunch of rooms randomly placed in a building.  Who builds like that?  I get how it works in Castle Greyhawk (insane mega-wizard does it for fun), but it gets old after awhile.  A city has some reasoning behind it, but not too much.  There was no real urban planning, but buildings do have to fit together in a city, unlike in a dungeon.

Maybe it's just me, but this has a weird appeal.  It might work really well to give you a Red Nails kinda location.

Posted by Matthew Slepin at 9:47 PM