Gaming In the Enchanted Isles of Avalon Hill's Wizards (Part 1) 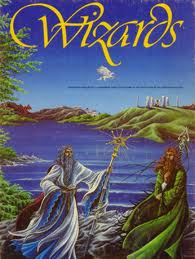 Avalon Hill put out the board-game Wizards in 1982, which would have been a year or two after I started gaming.  I have no idea how my Mom decided to get it for me as a Christmas present, but it was probably one of the best she ever got.  After RISK, Wizards is surely my most-played board-game (with The Awful Green Things from Outer Space and the mini-game Saga coming somewhere after).  Wizards was the first board-game I had ever played that had both cooperative and competitive play: everybody is trying to get the MacGuffin and drive off the Bad Guy, but everybody wants to be the one who does it.

But more explanatory of it's appeal to me at the time was the flavour of the game.  That link above to BoardGameGeek has a pdf of the rules booklet; if you've never seen it, check it out and see what I mean.  The setting is a sort of combination of Tolkien Middle-Earth, Le Guin's Earthsea, and...something.  The Designer's Notes make it clear that they (a husband and wife, maybe?) thought of the game as some kind of magic, poetic ritual in-itself, which, whatever you think of that, gives the game part of it's unique charm.  It also means that the game is full of detail and colour that is absolutely unnecessary to playing it as a board game, but which tend to make the wheels in the head of a role-player start turning.

For example, the game board is composed of eighteen hex-tiles (6x6) that are randomly placed at the beginning of play.  Six of these are Common (i.e. human), six are Elven, and six are Magic.  You really don't need to know anything about these territories, by and large, and yet each one gets a paragraph write-up in the booklet, such as:

Elven Territory VI - Woodland
Here dwells the the Elflord Finrel, wisest of all Elves, with his Elflady Vawn, the Spice of the Islands.  Together, they sustain the Richness and Fertility of the land. The Wise Woman Hamdrel, who favours all woodland dwellers, keeps close ties with these Elves and encourages their Life-giving Magic.

Aside from obvious Tolkien riffs, note also that those portentous capitalizations (Richness, Magic) are as written.  Also, remember that nothing in there matters one little bit for purposes of playing the game as written.  Even the incredibly boring human places (so boring that they are officially termed "Common Territories", rather than "Human Territories", get little details:


Common Territory II - Woodswall
When these Men began to mistrust the woods, where the Elves tended to dwell, they built walls between the woods and their towns.  Due to these walls, the Men of Woodswall have been forced to look outward to the sea.  They have become great fishermen, knowing much of the waterways.

Those three sentences have a lot of compressed back-story in there that could be mined for ideas if one wanted to do something other than just play the board game.  Why did Men begin to distrust the woods?  Are there Elves in the woods near Woodswall now?  Were there then? What's the state of relations between the two today?

Another example.  There are seven High Wizards in the game, who are definitely of the Tolkienian angelic variety and, Saruman-like, one has become evil, or, as the game terms it, a False Wizard.  I love that term, by the way; although you could take it to mean simply that he is false i.e. untruthful, I prefer to think it means that a real Wizard is, by definition, a servant of the Good Power and that the traitor has made himself a fake.  I think JRRT would approve of that. Anyway, in game-play, the High Wizards are just encounters that can do stuff for you and it really doesn't matter whether you meet Ishkatar, Aevarex, or Elekov (except in the end game it matters if you meet the False Wizard).  Yet, each High Wizard gets a unique staff design (check out the box cover above for two of them) and an evocative description in the book.  I mentioned three of them above, so here are their write-ups:

Ishkatar - Wise Lord of the High Wizards, possessor of Knowledge and Understanding, seeing and hearing hidden things, Ishkatar is the greatest of all beings who inhabit the Enchanted Isles.

Aevarex - Righteousness, Truth, and Purity are the source of the wisdom of Aevarex, fairest of the High Wizards, Healer of Harms.

Elekov - Elekov the Mighty.  He is unsurpassed in the wise use of magical powers and honours the strength of even the humblest objects. 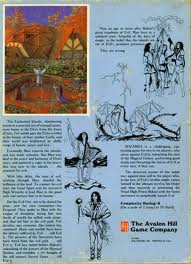 Finally, I have to mention the amazing art, all by one of game's designers, which the Designer's Notes say isn't just intended as illustration, but as window into the world (pretentious, perhaps, but not inaccurate).  I don't have the useful software these days to clip out pictures from the book, but go check out that link and look at Sorcerer's Spell (p13), the Doug Henningesque Wizard in Telepthy (p15), or The Elflord's Revenge by the Power's of Finrel, Hispan, and Havor (p17).  Like the style or not (I largely do), it does, in fact, give you a window into the setting.  I love, for instance, that skull-cap on the sorcerer.

I haven't even discussed the Task Cards yet, which give a lot more information on the setting, but I think the point is clear enough: Wizards oozes a certain flavour which would go well with role-playing (the chocolate to rpging's peanut butter, perhaps).  That's certainly how it felt to me back then and is surely one of the reasons I played the game so often, because the game-as-board-game has some serious defects.

Most notoriously, it has a very draggy end-game in which the characters, who have spent the whole game to the this point sailing all around the Isles, performing Tasks, suddenly stop moving and just pick cards and/or roll dice to try and get the MacGuffin together, then do the same to try and take the MacGuffin home.  I can recall getting very frustrated many times by having my character stuck outside the Sacred Circle, trying to roll the number I needed to get in and hand the damn WMD to the High Druid, who supposedly wanted it, but can't be bother to get off his arse and step outside to get the thing.

A less obvious deficiency, and maybe one that wouldn't exist for pure board gamers, is that the abundance of flavour is tied to mechanics which don't support it.  All that cool stuff I spoke about above, which is nifty but doesn't impact play, doesn't even work in play sometimes.  The one that always irritated me were the three Magical Orders.  Early game-play involves the characters trying to be initiated into one of the three Orders, each of which is given a very distinct origin and spin: the Wizards  learn from the angelic High Wizards and seek Knowledge; the Sorcerers learn elemental Arts originally taught by the evil Dragons and seek Power; and the Druids seek to recreate the magic of the Druidic race, a virtually extinct people born of Humans, Elves, and High Wizards who sought Perception (incidentally, this implies the High Wizards of the Enchanted Isles are not the essentially-sexless manikins of Tolkien).

Now all that is cool, except that whatever Order you join, you still learn the same damn magics. There are three Movement spells (Boat Summoning, Swiftness, and Transporting i.e. Teleportation) and four Encounter spells (Animal Summoning, Demon Dispelling, Dragon Taming, and Escaping, which last is surely the less used spell in the game, doing nothing much of interest).  True, each Order does get one Special spell at Rank Four (the highest Rank and the beginning of the end-game), but both the Wizard's Telepathy and the Sorcerer's Gem Summoning do pretty much the same thing (give the player a chance to get a piece of the MacGuffin).  While Wizards, Sorcerers, and Druids get a little variety in when they acquire the spells and at what strength (Druids can Demon Dispel sooner, while Sorcerers get more range on Boat Summoning), it's not much and by Rank Four there isn't any real distinction left.

So, what is a poor gamer to do in such a situation?  Well, let's talk about that in our next, enthralling installment.